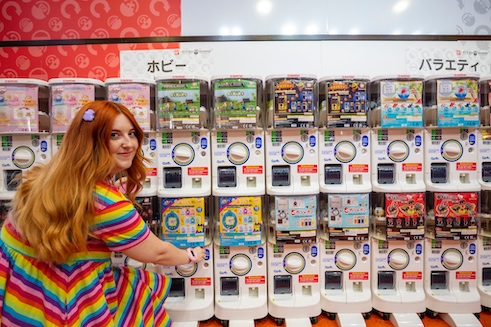 The craze that has taken Japan by storm has landed at Metrocentre Gateshead. Located within Namco Funscape on the ground floor of the yellow mall, shoppers can discover a range of Bandai vending machines filled with mystery items and collectables.

The first of its kind in the North East, and one of only two pop-ups in the UK, the Gashapon machines are set to be a hit with people of all ages, particularly those who have a keen interest in all things anime and Japanese culture.

Gashapon vending machines dispense capsules which contain highly collectable figurines and characters, usually from popular TV shows, anime or pop culture. The excitement comes from not knowing which item you are getting until you have opened the capsule. In Japan there are entire stores dedicated to Gashapon with one stocking over 3,000 vending machines.

Nikki Nichol, Namco Funscape general manager, commented: “Gashapon is a huge trend in Japan and, thanks to social media platforms like TikTok and YouTube, Japanese culture is hugely influential right now.  The pop-up is so far proving to be extremely popular with those using the machines being fully aware of the concept and excited to give it a go.”

Capsules cost £4 and £6 and customers can enjoy miniature figures of manga, anime and game characters, as well as more practical items such as computer and smartphone accessories, only available while stocks last.